Meeting the bears of Velebit in Croatia

Meeting the bears of Velebit in Croatia 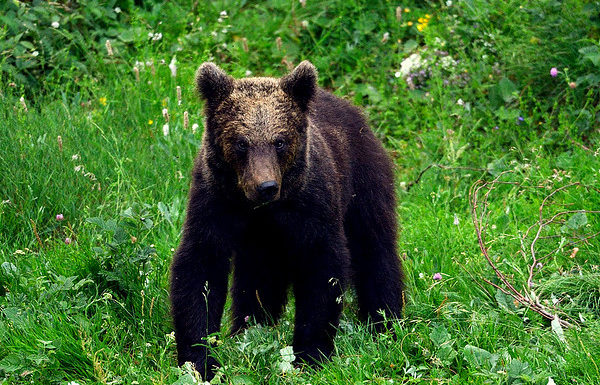 I am not sure what to expect, as we make our way along winding roads through stunning forests in Croatia. I am visiting our Conserving Bears programme, and the team have highlighted the fact that there is a bear orphanage about an hour away. Intrigued, yet apprehensive about what we will find there, I agree to visit the Kuterevo Bear Orphanage. My default stance on sanctuaries is one of scepticism. A stance based on the multitude of wildlife sanctuaries that do not exactly prioritise the best interests of the animals in their “care”.

We arrive in Kuterevo, a small, quaint village. It can be found in the mountainous area of Velebit. We then make our way to the bear orphanage. It is clear that the bears are the main attraction in the village. Especially so since the bear orphanage opened in 2002. I keep my expectations low and my mind open as we pay our entry fee in a small wooden cabin lined with bear conservation posters and photographs. Along the pathway to the bear enclosures, we greet a few staff who are all preparing a feast of fruit for the bears.

Our guide takes us on a tour of the bear enclosures, and I am pleasantly surprised by their large sizes. The habitat inside the enclosures is natural – grassy areas, plenty of trees and bushes, fallen logs and areas for the bears to remain out of sight should they not be in the mood for company. Some of the enclosures are even inter-leading via tunnels underneath the fences, and the bears can choose which enclosure they feel like being in. Coming from Africa, bears are not a species I am familiar with, and I feel quite excited when I spot our first bear! Then a few appear out of the bushes, and a couple of them are quite curious as to who their new visitors are. They look healthy and are energetic and playful.

I am curious as to why there are bear orphans, and our guide explains that it’s primarily due to loss of habitat through deforestation and general human encroachment. Female bears are often scared off by the sound of the chainsaws or are scared off from homesteads, causing them to panic and go into hiding, with their cubs being abandoned in the process. Two of the eight bears here have been rescued from zoos that were not able to provide the proper care that the bears needed.

We leave the bear orphanage, and I feel happy for the bears there that have been given a second chance. Even though they cannot be released back into the wild, they now have a great forever home where their needs are taken care of. They also serve as ambassadors for their species, the Brown Bear, helping to highlight the challenges they face and inspire change.

On the last evening of my visit to Croatia, we are making our way back to Linden Tree through Velebit National Park when we see a wild Brown Bear cross the road ahead – what an unexpected treat! There are only about 1000 bears in the wild in Croatia. Even though the Brown Bear’s range has shrunk and it has even faced local extinctions, these bears remain listed by the IUCN (International Union for Conservation of Nature) as a species of least concern. Due to their total world population of around 200,000. I hope their status is reviewed, encouraging better protection for them.

Linden Tree Retreat and Ranch is a base camp, and has been described as a magical place in the middle of nature. Which is indeed true as it is nestled in the UNESCO Velebit Mountain Biosphere Reserve. Not our typical volunteer camp, visitors book on a per night basis rather than our usual minimum of two weeks. The team also presents our Wilderness on Horseback adventures – which is enjoyed by several of our equestrian school groups.

2019-11-29
Previous Post: Uniting for elephants
Next Post: Where does it go? How to retrain your brain to become a conscious consumer.