Liam was able to join up with the volunteers at Worldwide Experience’s Conserving Whales project in early November. Based in Plettenberg Bay South Africa, this project is right in the middle of one of the most interesting marine ecosystems in the world. Liam wrote a brief summary of the action packed days he had at the project.

“I met up with the volunteers in Port Elizabeth, on their way to observe a female Elephant seal and her cub that had washed up on the beach. They were buzzing because Elephant seals haven’t given birth on the South Africa coastline in over 50 years. We then headed over to Bayworld to help dissect a marine animal with the head scientist there. It turned out that a Striped dolphin had washed up on shore as well. This was also extremely rare as Striped dolphins are deep water species and don’t come in-shore very often. We were put to the task of helping uncover the reason behind the dolphin’s mysterious death. I know dissections are not everyone’s cup of tea, and, honestly, I was even a little hesitant at first (it was a dead dolphin after all). But, once everyone got stuck in, the actual scientific data we were collecting was fascinating. There isn’t a better way to learn about the biology of a dolphin! Unfortunately, we weren’t quite able to solve the mystery of the dolphin’s death. After we helped Dr. Greg clean up the lab, we washed up ourselves and headed back to the project’s headquarters in Plettenburg Bay.

The next morning, we set off on a whale watching tour with a boatload of German tourists. While the tourists were taking selfies and getting seasick, the volunteers and I were surveying the marine life observed on the voyage. I was in charge of recording the sightings of any offshore bird species. While I was recording the behavior of a group of Cape gannets, a massive bird flew overhead – it was a Yellow-nosed albatross! This endangered species flies across the southern Atlantic between South America and Africa, making this a rare sighting. On the tour, we also drifted with a pod of over 300 Common dolphins and passed by a massive seal colony. With the seal colony, there was another rouge Elephant seal, this time a gigantic male with a squashed elephant trunk nose. With the wind conditions picking up, the captain had to splash the boat back through aggressive waves and beach it to let off all the tourists. It was an exciting end to a great boat trip.

In the afternoon, the project got a call about Cape-fur seals washing up on the public beaches. Seals washing up onshore are a common occurrence during this time of the year, yet usually isn’t good news for the seal. Unfortunately, the seals we found had all died at sea. The volunteers were put to the task of recording specific age and size data per seal and taking DNA samples for the lab. The DNA taken off the seals will be able to determine the seals diet leading up to its demise. This collection of data is helpful in determining what leads to seals being washed up during certain times of the year. 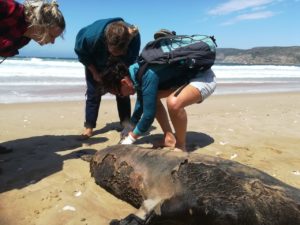 The next day we headed over to the Siyakula school, a pre-school in the local township partnered with the Conserving Whales project. The volunteers and I ran a lesson about local marine animals in English. This was aimed to expose the children to local sea-life while also helping them learn how to read and write. They sang songs to us and we sang back to them. We read books to them in English about conservation while their teacher translated it to Xhosa. Finally, it was play time and the students demanded that we play their favorite game, Dolphin! (or sharks & minnows as we call it back home). The children took turns sprinting across as we chased them about. Once it was snack time it was time to say goodbye, and we left to the students singing us another song. 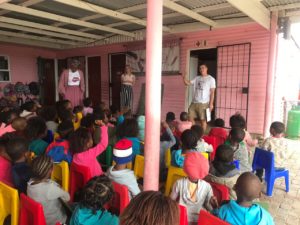 We then headed off the test the water quality of local streams around Plettenberg Bay. The project uses key identifying species or micro-organisms to determine the health of the ecosystem in the streams. The data is recorded and compared with the surrounding tributaries. This helps determine the overall health of Plettenberg Bay’s watershed.

Being at Worldwide Experience’s Conserving Whales project was action-packed and educational. The volunteers worked hard but also got to see what goes in to into conserving marine animals. You get a lot out of going to a project like this while also being able to give something back as well.”

2019-12-30
Previous Post: Where does it go? How to retrain your brain to become a conscious consumer.
Next Post: Worldwide Experience’s intern joins our Wildlife Management Course for a week!